This afternooon, I joined Mike Sutton’s Improv session. My takeaway: “It doesn’t hurt to collaborate”. The exercises were fun and funny, and gave insight into how teams worked together. I particularly liked that Mike used a task board to keep track of his session.

We did a lot of fun exercises, and had lots of opportunities to do the “failure bow” (similar to “How Fascinating” in Language Hunters) we learned from Tobias in the warm-up this morning. We encountered so many things that happen on software projects. For example, when we had to draw a picture by committee, each person had a different viewpoint on the picture and a different idea of what we were drawing.

Next, I joined the Ball Flow Game facilitated by Olaf Lewitz and Gerry Kirk. This turned into a hilarious example of “too many cooks in the kitchen”, in my opinion. Just try to get a bunch of agile coaches together and get something done! We started out really well, producing the inventory of “magic balls” efficiently, in just over one minute.

Then, naturally, since we had done pretty well, we changed everything at once and came up with a totally new way to “deliver” the magic balls. My personal estimate of five minutes was not too far off the real result. It was a good opportunity to reinforce the fact that it is better to do small experiments and only change one thing at a time than to do a drastic reorganization.

Paul Boos, one of the ACCUS organizers, was kind enough to let me take a slot in the agenda to get help in trying to develop a game that would teach tester-developer collaboration. My goal was a quick game that would teach testers that it’s not a bad thing to test early and often, and teach programmers that it’s valuable to have testers involved throughout development. I can’t afford Legos and I don’t like to check my bag when I travel, so I wanted to do something with a construction kit that uses plastic straws (similar to drinking straws) and connectors.

A wonderful group of people came to help. They started throwing out ideas, and it first, it seemed there was no way I could create the kind of game I wanted with the straw kit. While they brainstormed, participants built some awesome straw constructions, proving that using our hands does help us learn and think!

It turned out that you can build a lot of two-dimensional shapes with the straws: squares, rectangles, circles, arches, hexagons, lips. The group proposed that the first part of the game would be for each team to build all the shapes. These could be “tested”. In the second phase, each team would put the 2D shapes together into 3D shapes, and try to build the biggest structure that could hold its own weight when picked up. This also would encourage incremental testing.

An additional idea was to throw in “hidden requirements”. For example, when the facilitator comes around to verify the 2D shapes, she could say, “That is indeed a square, but I forgot to tell you, all the straws in the square must be blue.” This would simulate a real-life project.

This isn’t the quick game I envisioned, but it has potential, and I think it’s worth trying out. Thanks to everyone who helped me, I’d never have thought of this on my own! Collaboration rules!

Even better – communicating while drawing! 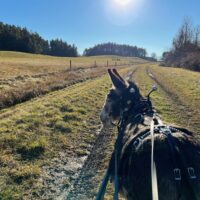